Robert has been working with databases since SQL Server 2005. After 4 years as a .NET developer using SQL Server, Robert became a DBA out of necessity, a true "Accidental" DBA! Robert has presented at his local SQL Server User group, SQL Saturdays and PASS Virtual Chapters. As a Microsoft MSCA and an Idera ACE, Robert enjoys administrative tasks, configuring SQL Server for optimal performance, troubleshooting problematic SQL queries and making those query run faster than the speed of light. In the event of "free time", Robert enjoys camping, playing his guitars and spending time with his family. 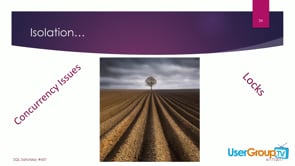 You want me to Isolate what? An introduction into data integrity and Isolation Levels of SQL Server