Some may call John a geek. He prefers the term "technologist." Truth is, John began working with computers before PCs even hit the scene, and he’s probably got a dusty prototype stashed somewhere to prove it. He’s a fourth generation educator who loves to help people learn new technologies and relishes that magic moment when the light comes on in their eyes. Before joining Microsoft full time, he spent six years as an MCT, training people at a local college and getting new Microsoft hires up to speed. John holds more certifications than he can remember, but the list definitely includes MCITP, MCSE, MCDBA, MCT, and CCNA. His favorite technology is Unified Communications, LYNC and he gets a special thrill from solving customers’ problems. For John, there’s nothing like coaxing people from panic to joy when a server goes down and he can help get the business back up on line. When he’s not working, John can usually be found sailing around Texas with his kids. 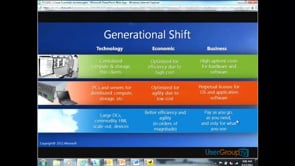