Franklin Gamboa, MCSE, started his career as a Java developer, but then moved to the .Net world, in 2009, he was mentored to be a DBA and has been in the data platform side since then. when he was a DB Architect, he did Web Apps for fun, since that helped him understand the needs of the developers. He eventually made it to be part of the Microsoft SQL Server CSS team. 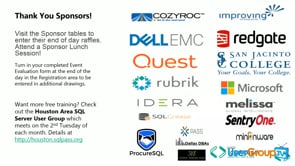 From the grave: Horror stories from the Microsoft SQL Server CSS archives