Christos Matskas is a software developer, dad, blogger, husband, speaker, and all around geek. He currently works as a Developer Advocate for Microsoft Identity helping developers and teams leverage the power of the identity and cloud. Before joining Microsoft, he was a successful entrepreneur collaborating with companies such as MarkIT, Lockheed Martin and Barclays. He's been building software for over 16 years and he's a passionate Open Source advocate. He contributes regularly to numerous OSS projects and works closely with the developer community to make the space bigger and better.

on May 12, 2022 at
Cloud Security Azure Managed Identity Service Principal 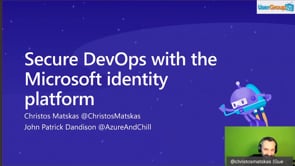